Truly a pain in the rear end, my critters were all scared out of the skulls last night! I don't blame them!!!! Our neighbours at the back had a huge fireworks display at midnight and it went on for a good 15 mins, music pumping as usual when they having a get together. Lucky it not that often, maybe 8 parties a year, it feels like right next door only we're on 25 acre block, and they up the other end. Actually we don't mind the music to much!

Now to get back to the animals, you could recall Chief the Golden Retriever is petrifed of thumber and load noises, jumps fences and takes off. Tammy the english springer spaniel is not much better, while Knight (Tammy is his aunty)is a little nervous. We locked the Chief and Tammy up in the big dog run, so they would be safe. Knight got to be in the computer/study room and slept under the desk. 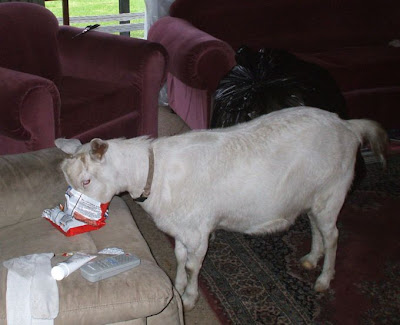 I thought I just share this pic with the rest of the world, Someone left the front door open the other morning, and guess who came in and found the chips packet, she was shoed out before she left a wet patch thank goodness.

Well when that first cracker went off, Miss Daisy who sleeps on the stack of solar panels next to the house, got the biggest scare, bolted though the carport, if you have seen my carport you'd understand you need wings to get through there. And made it to the front door Please let me in!! Anyway I had planned to watch the fireworks on the TV but ended up pacifying Miss Daisy. Who yes you guessed it slept in the laundry for the rest of the night.

Thank God no problems with the cat ... Tanya had gone to check on the sheep and they too were very nervous. George of couse had gone to bed at 11 pm, was not aware of any of these problem, joked why did you not bring the sheep in too ... funny! It's a zoo at our place alright.

We had to see the Dr for George's Drivvers licence, the RTA Driver's licence requirements a form only you regular Dr can fill it in, it's so you can extend your Drivers licence for the next year. Being a diabetic on insulin it need to be done every year. While we were doing that, Tanya was at the vet with Smelly who looked very grumpy with a thick lip, that turned out to be from his rubbing his chin on the spots Jellybean had been spraying outside. It's mating season but all our animals have been neutred! anyway he got an antibiotic. Knight on the other hand has had an eye infection, which we have been treating for sometime now,only it not really clearing up. The vet took tests and have sent them away, we'll know in 10 days exactly what it is. But she thinks it could be a livestock desease he has picked up. He is losing his sight as it's causing the eye to go hard, so we'd better get it sorted out.

The vets are open from 4pm to 7pm, no appointment first come first served, we travel 45 mins to get to the vet, while there are vets just 10 mins away, but it's so worth it. Only after all that, Tanya's car decided it can't run on empty any longer, she bypassed 2 service stations on her way there. Calls to tell us she's out of petrol but will walk to the service station for a jerry can and some petrol. After about 1/2hr she calls back, it woun't start, so off we go again at 8pm after we ourselves had just done the same trip to the doctors, armed with a big jerrycan of petrol, one of Des's steel cables incase we needed to pull her out and the torch. Well Des's cable came to the rescue ... someone got to eat his own words last night ... what am I going to do with all this stuff Des left here. Dessie I love you Mate Hoarding stuff pays off. It was about 10.30 when we got home .... See I told ya it's a zoo here

A wonder New Year to all of you who stuck it out to the end xox
Posted by Rina ... also Chester or Daisysmum. at 7:53 AM