We've begun to long for the pitter-patter of little feet - so we bought a dog. Well, it's cheaper, and you get more feet.
Rita Rudner

That's so cute don't you think. 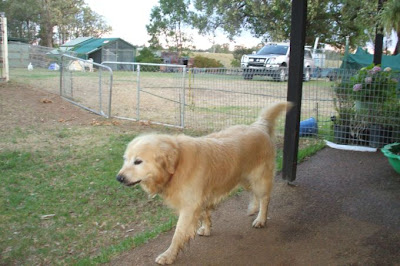 . Some of you might be wondering how Chief the 10 yr old golden retriever is getting on, remember we found him on the community board. Yes he has finally settled in with the other dogs, still growls a little when the other dogs get to close at dinner time or when he's got a bone, which is normal. And he does not wander the streets of Mulgoa anymore. Chief is frightened of thunder so that could be one of his problems running away. And the fence was replaced with a more permanent one. In the beginning we were very concerned about him biting Tammy who had only just seettled in herself. She replaced her Mom Lacy Pants, that was her show name, her eyesight was failing and died of cancer last year. 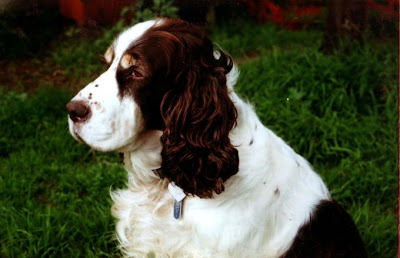 Lacy Pants ... grandma to a lot of springer spaniels, winner of many titles including the Sydney Easter Show. She's now in Doggie Heaven. 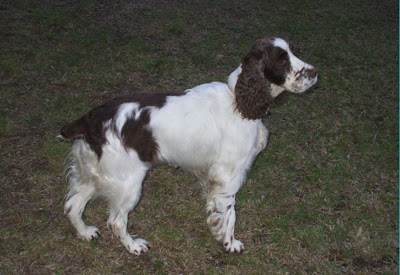 One of the first photos taken of Tammy

Tammy (6)is the split image of her mother, both very gentle souls. Poor Tammy was badly mauled at a dog show by a stray and lost her nerve around other dogs, so was retired early and came to live with us. It took a lot of coaxing and love for her to trust us. At first Knight thought it was Lacy when we introducted them, going straight to clean her ear which he did daily. 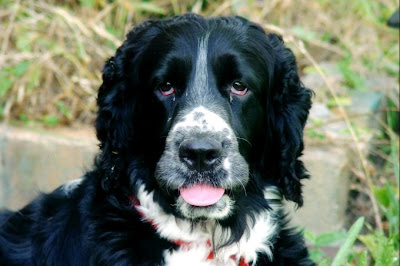 Our other male dog Knight (6)was always top dog, grandson to Lacy, he is also the youngest dog, soon found himself growled off his throne, now has to settle for second spot. He's a lover not a fighter, prefers a play rather.
Now here is one very special dog, looks a bit like a walrus with his curly coat and top but it suits his personality. He was Lacy's helper, esp when she had just woken up from a doggie nap and needed to know where everybody was. Napping a lot nearer the end. She would bark until she saw him coming to fetch her, her hero.
Posted by Rina ... also Chester or Daisysmum. at 6:30 AM