Stuffed Zucchini with a little left over mince. 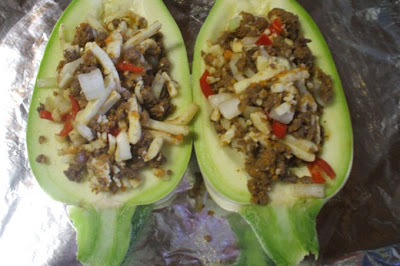 Picked another one of those big zucchini's yesterday, a lot smaller in lenght but just as fat. We had Mexican chilli mince with those Stand'n Stuff Taco shells the ones with the flat bottoms, with the usual filling for dinner last night, rather yummy. A little mince was left over and I added some diced onion and grated tasty cheese and mixed that. Now following Pina's ( my Japanese friend) recipe ... first you slice it then hollow it like a canoe, fill it up with mince and top with cheese, bake in the oven. It's yummy.

So I did all that and it was yummy. These are a few nice zucchinis on the plants still, so now I need another recipe to try out. 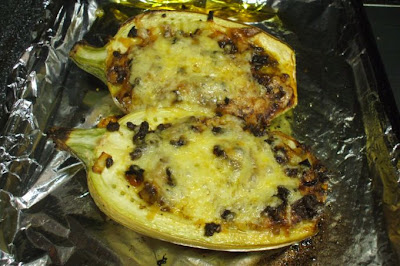 This week has been dreadfull with the aminals. Our silver persian cat has been at the vet since friday, suspected poisoning Which means he must of ate something or his body is poisoning itself, they doing tests and are waiting on results, meantime his is on a drip. If his blood cells don't inprove by tomorrow afternoon, he will have a blood transfusion. Romeo (Smelly) is only 3 years old and has many more cat years ahead of him. Today he looked heaps better than Saturday morning when I popped in. 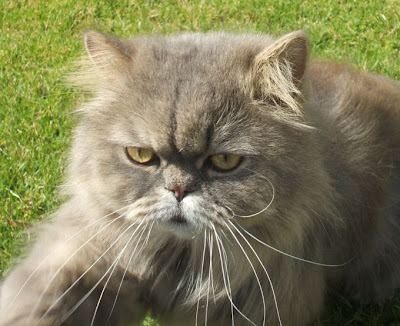 Daisy has broken a horn, ramming one of last years neutered rams, it was more a playing thing only her horn broke right at the base. Not sure what the livestock vet will do tomorrow. Both horns are a problem even after having her dehorned , having grown out deformed. I don't think I would leave it any longer than a week next time to have it done. Daisy was 2 1/2 weeks old when the vet did the processure.

We have also had 3 unwelcome visitors, 2 baby red belly black snakes and a 1 mtr brown snake. Lucky no one got bite. What an eventfull 2 weeks.