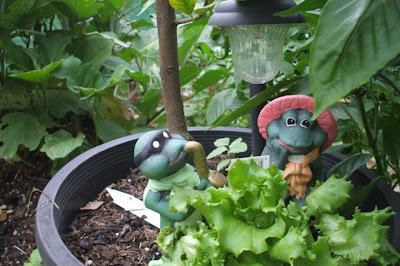 Frogs serenading under the lamp post! They were given to me by two little girls that came visiting in the veggiepatch ... we planted strawberries and a few seedling. It was the baby chicks that stole the show. a punnet of iceberg lettuce waiting to be planted. 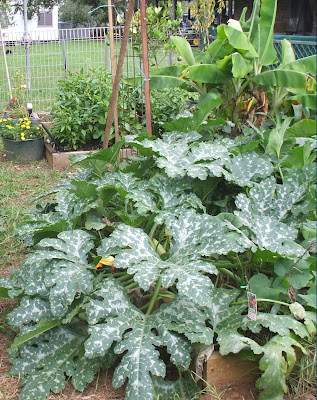 These plants are still full of baby lebanese zuchinnis , not sure what variety they are cause they grow huge. a tube of mini bananas that need seperating. Kumera sweet potatoes getting a little out of hand. A butternut vine with a heap of flowers and tiny baby butternuts growing. It's a mess but a lovely productive mess. 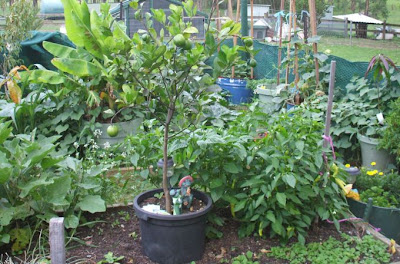 These turnips growing for greens for the animals and the occasional pot of soup. Banana chillies to the right, great for roasting. A lemonade tree in a pot for shade. Beetroot seedling coming up at the back. A punnet of eggplant grown into a large bush with heaps of purple flowers. 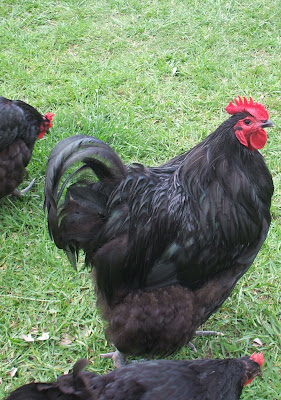 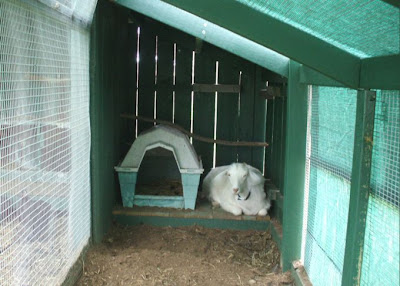 Daisy hiding from a few raindrops in the east wing. The dogkennel which is now a nesting box from the council clean up. Note 50% shade cloth covering the whole chookhouse giving shade in a very open spot. Temp. underneath is a lot cooler.
The veggie patch was getting a little cramped and with a mate giving us a heap of nice fencing, we decided to replace the old wire fence. DH had to dig a few new posts and we enlarge the patch a little, screwed the new fence panels on and put the shade cloth back up. It's there as a windbreak creating a nice micro climate inside the veggie patch. Next weekend we will add another large raised bed and truck in some ground and more mushroom compost. Daisy spend the day in her enclosure wondering what she did wrong.
Hope you enjoyed my little tour of the new improved patch.
Until nextime
Rina