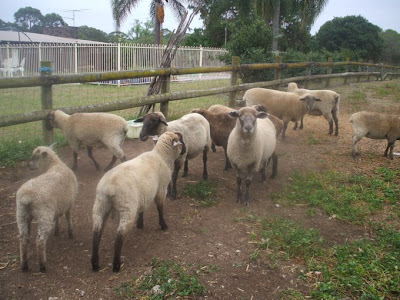 You'd think it visiting time but no they waiting for their dinner.

Sometimes ya just don't wanna know but then ya have too...
The blond one's had to go back to hospital's emergency department, lucky they did not keep her, only gave her more medication. Her surgeon could only see her on Thursday, so they sent her there. With ruptured appendix there could be complications such as an absese. Otherwise she doing alright.

And our little sick lamb, is still not so well either, she has recovered enough to start eating and drinking. Her little face and neck were still swollen but there was an improvement. I think with the swelling and temperature she has developed another problem, it looks like an absese on either side of her cheeks,one hard scally piece has rubbed off and is now exposed. The shearer recommended an anitseptic pink spray but atleast the angry puss is draining. He's due to stop in sometime today otherwise it's straight to the livestock department at Camden University ... Might take her there anyway.

Atleast work was a good day yesterday and I managed to put in 8hrs. That leave me with 21hr so far for the week, so I have to go in tomorrow. And I wanted to have good hrs this week ... got bills to pay.

UPDATE: Tuesday
Don's been and gone, poor man he was faced with a bad case of flyblown, maybe I better not explain that one to you, you need a very strong stomack for that. He thinks it was an absese that burst open and you don't wanna know .... anyway he removed what skin had to be removed and cleaned it. He gave us some stinky spray to spray on the wound. She'll be going on a cource of antibiotic, sprays and creams until a scab forms and the new skin grows back. It's going to take awhile cause it's about the size of a saucer. She will recover and go on to have lots of babies one day. I really hope we made the right decision but she is a fighter and pulled through with the barbers pole and that says a lot. I did take a few pics but just can't put them on here, sorry.

Have a lovely week
see ya
Rina
Posted by Rina ... also Chester or Daisysmum. at 8:21 AM