Get the floaties out ... it's raining

The weather man was a little out with his timing, we only had 6 drops of rain fall late Sundag afternoon. I had just finished putting the mushroom compost down and worked it into the soil with the garden fork, around the pumpkins and got the hose out to water them. Des planted the pumpkin seeds so I am not to sure what varity will do best. Lets hope the gem squashes and Queensland Blue bear well ... need to save some seeds. 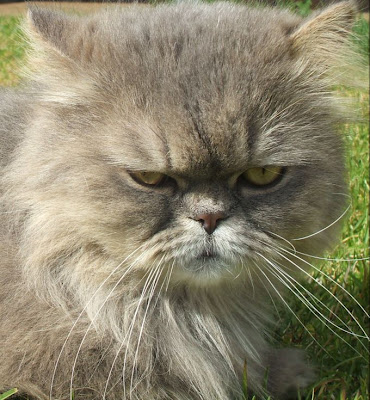 Romeo Alias Smelly moved in after his owner decided it was just to much trouble to clean his litter tray and give him attention. He choose to belong to the Blond One (Tanya), when her friend bought him she warned her about the responsibilities of owning a cat but he was so cute and was a trophy that soon wore off. Last year he came so close to dying when a snake bite him but got a mouth of furr, he licked himself clean and got the poison in that way. It was touch and go for a week esp. Smelly does look a little grumpy but he is so loveable.

Atm it bucketing down, little dams of water everywhere, making driving a nightmare. The chain of ponds from up the road, through everyones properties are over flowing and the grass is so lush. George is a little annoyed that we did not mow the lawn yesterday cause it is a little long some places, now it will have to stay that way till after the next weekend. LOT OF RAIN FORCAST Our main concern is snakes really don't want to have a repeat performance of last year when we nearly lost Smelly. Jellybeans is a hunter brings home baby wild bunnies and birds of all kind and lizards ... she is the only cat of the six that hunts. She bought a present into the house and promptly killed the bunny under Tanya's bed, someone was not happy.

The trailer is loaded with wooden rails for the fence and the steel trunks/toolboxes which I thought would be great for storing stuff like feed cause mice won't be able to get into it. We really need to do a little spring cleaning in the carport. I want to load the spare washing machine as well and take that up. We leave Friday morning early even if it snows!!!!

It's late and bed time for me, so it's Good night to you all
Rina
Posted by Rina ... also Chester or Daisysmum. at 9:47 PM